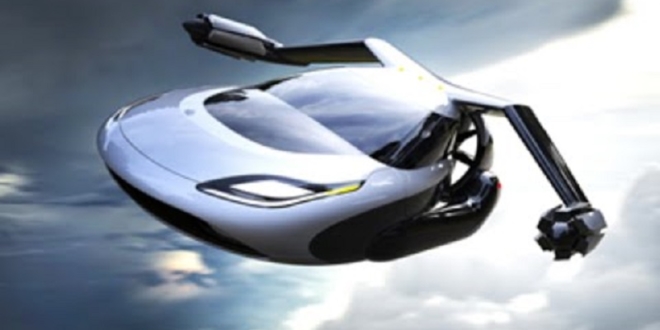 As if any proof were required that we now live in the Blade Runner movie, from next month you will be able to pre-order one of the first flying cars in the world.

Yes, this means that in the not-too-distant future you will be able to whizz around the sky, Jetson style, in a vehicle which can transform between a standard (well, as standard as it can be) road car and a real flying car in less than a minute.

They are made by a company called Terrafugia, that belongs to Volvo, and it is called a Transition. The flying car can fly for up to 400 miles and it can reach a top speed of 200mph. That is pretty quick, by anybody’s standards.

There isn’t a definite price on it yet, but you can safely assume that you probably can’t afford one.

According to Chinese news agency Xinhua, they’ll be taking pre-orders on them starting from October.

So, what can we expect from it?

Well, it’s hybrid electric powered and has all of the usual things you’d expect from a car.

That being said, what it provides that my battered Ford Fiesta doesn’t is a parachute system, fold-out wings, and a ‘boost’ mode aimed at giving you a bit of extra oomph when flying.

Nevertheless, one thing that it does require that my old Fiesta doesn’t is a pilot’s license.

It’s road legal, but you’ll need to be allowed to fly an airplane to take this thing off terra firma.

With that in mind, the company believes it could be of great use to pilots that can fly it to a small airport, then fold the wings in and drive it home. That’s an ambitious business model. Niche doesn’t entirely cover it.

However, if you’re in that small group of pilots who continually thinks “I wish I didn’t have to get out of my plane to drive home” then this is the perfect vehicle for you.

After that, there are plans for the TF-X, a four-door version that they claim won’t require an airport for take-off and landing.

They say: “The TF-X won’t require an airport for take-off and landing, and it will drive on all roads and highways – providing the convenience of true door-to-door transportation.”

“We are at the critical point where we can implement the best design features based on years of flight and drive testing.

“This will improve function, safety, and aesthetics for the optimal flying and driving experience.”

Now, just wait until one of these cars falls into the wrong hands.

Flying lessons are included in the price and the company’s website is taking orders tied to hefty non-refundable reservation fees. (Source)

This article (The First Flying Car In The World Is Now Going On Sale) was published by Thinking Humanity and is published here under a Creative Commons Attribution 3.0 Unported License