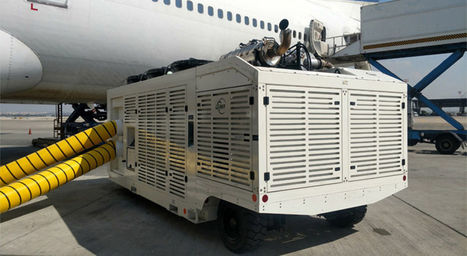 No matter what jet airplane you want to start, be it a modern F35 or an everyday Boeing 737, the main process is the same. You’ll first have to start the jet engine. And it’s not like how you would start a car. It’s not just a push button that does all the job. The main unit that does the job is known as a jet engine air starter. But the air starter is not working alone, the system also needs an auxiliary power unit, commonly known as an APU. The air starter must also be properly maintained, and you should only use high-quality air start unit parts when doing any repair work.

There are a lot of technical aspects behind the jet engine starter procedure, but we will try to explain the basics in this short article. Let’s start:

As mentioned above, airplanes don’t have a key to start the engine. The system is a little more complex, but it is safe and effective. When the pilots and the flight attendants arrive at the airplane, it is already powered up. However, the power is not coming from the engines, as they are not working. The electricity used to power the aircraft comes from ground equipment specifically designed to power up the aircraft while on the ground. The power comes from a generator or from an auxiliary power unit. The power is used to operate the aircraft’s maintenance equipment (for instance, the power required while you clean the interior).

When the crew is finally ready to start the engines, the aircraft receives power from a small engine and a generator located in the tail of the aircraft. This powers the airplane’s systems that help it get ready for departure. This small engine also provides the power required to start the jet engines. This is quite similar to how small cars are started – a small electrical motor is used to start the gas or diesel engine in your car. The same can be done for jet engines, but large jet airplanes use a high-pressure jet engine air starter to do the job. These units are very complex and you should always use high-quality air start unit parts when doing maintenance work.

When compared to propeller aircraft, jet aircraft are a lot easier to start. The process is quite simple and straightforward, as long as you have the right equipment. It all comes down to lots of high-pressure air, some jet fuel and… you are good to go. The tough part, though, is getting enough compressed air.

But Why Is Compressed Air So Important?

This question cannot be answered without first explaining how a jet engine works. These incredible machines basically run on air – they suck in tremendous amounts of air, squeeze it, burn it and blow it out. The engine sucks the air through its main intake, sends it through the fan and then reaches the compression area. On the other hand, a turboprop engine works by letting the airflow along with the engine. The jet engine takes it in, compresses it and then blows it out.

The compression mechanism works in multiple stages, passing through an average of 14 rows, or stages, of compressor blades. After the air passes through these stages, it is very hot and gets out as highly compressed air. This air passes through a diffuser, which helps it cool and slow down. After this process, it goes to the combustion chamber, where it’s mixed with fuel and burned. Normally, the mixture of fuel and air burns constantly, unlike common, reciprocating engines. The engine does not work on a series of explosions, it burns constantly, similarly to a furnace. During the burning phase, the air heats up, expanding tremendously. This air is forced out in multiple stages, creating thrust.

Starting a jet engine now sounds quite simple, right? You just get enough compressed air to start the whole process… Well, this is the difficult part. During the start sequence, the core of the engine needs to spin at about 15 percent of its maximum speed before the igniters start. If the maximum speed is 16,000 rpm, you will need to reach about 2,200 rpm. It’s impossible to reach this number manually, so you will need a good jet engine air starter to do the job successfully. Then, the core needs to reach about 29 percent of maximum rpm, which is about 4,500 rpm – this is the spot where the engine produces the fuel and air mixture. This entire process requires a lot of condensed air.

So Where Does All This Compressed Air Come From?

For civilian airplanes, the source of compressed air comes from the built-in APU. This unit is located in the tail of the engine and can power up the aircraft’s engines. However, if this unit doesn’t work properly you will need an external jet starter. The unit is also called an air start unit and is used to power up the engines when normal systems don’t work. Jet engine starters are common pieces of equipment at airports. Every airline must have several units in order to avoid issues when powering up their aircraft. Air starters must be properly maintained in order to avoid technical issues and only quality air start unit parts should be used when doing repair work.

There’s another way to start the aircraft engine. This method is used when all other systems fail – the internal starter and the air start unit. This method does work and is reliable, but you will need to have an already running jet engine. The idea behind this method is simple: turbine engines bleed off a lot of air which can be used for other engines. This compressed air can be routed from one engine to another. You will need special hoses and equipment in order to do this, but it does work and can be effective when other methods fail.

Hopefully, now you understand the importance of compressed air in starting a jet engine. Jet engines serve as another example of masterful engineering, so next time you’re on a plane flying through the air, consider how simple and innovative this process is.